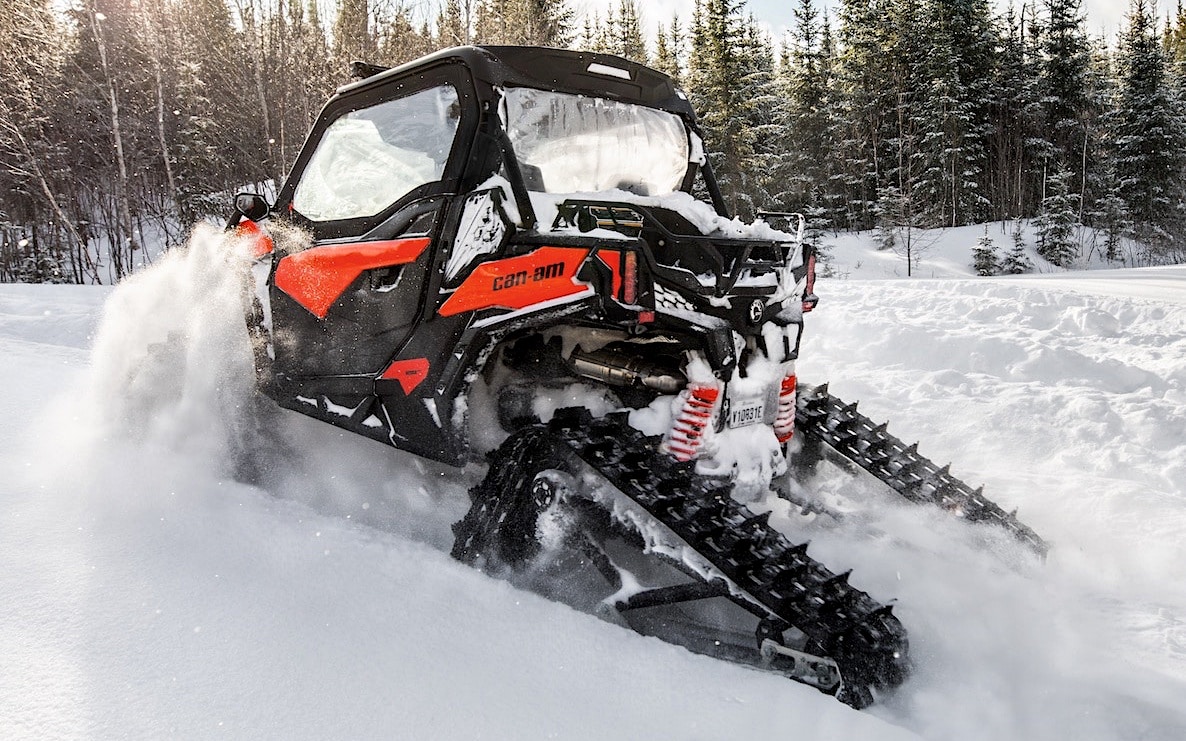 Sure running side-by-side tracks on your Can-Am UTV will make it slow and limit your top speeds, but tracks will undoubtedly make your machine unstoppable. You can go virtually anywhere on the right set of Can-Am tracks, with no powder too deep and no drift too tall. Just don’t expect to go 40mph with them on, lest you blow through belts like a madman. Yes there are cons to every aftermarket accessory (unnecessary weight if nothing else), but the benefits of aftermarket Can-am tracks far outmatch the drawbacks. In this guide we’ll get down and dirty with UTV tracks, exploring which are the best, how to use them, and the best practices for running Can-Am tracks on your side-by-side.

Running tracks on your Can-am -- be it a Commander, Defender, or otherwise -- is not the same as running beefier tires. For optimal performance, we’d suggest modifying the clutch of your rig make function better with UTV tracks. The Can-Am clutch kit by Dalton works great, but based on the age and edition of your Can-Am, there could be easier ways to do to your clutching. But either way, adjusting or upgrading your clutch for track specs makes a world of difference.

When running tracks on a Can-Am, Brp suggests to disconnect the CVT intake under the dash as removing it ensures adequate airflow. You can also have a blower installed to move more air through the CVT as well as a temp probe on the CVT exhaust-port to monitor the temperatures. You should be able to ride in low at 22mph all day and not heat up, and in short spurts at higher speeds in a higher gear. However, you really have to monitor the belt temp when doing that. Best practices say to not let the temp to get above 180°.

If you’re not careful going 40mph and running 7200 RPM off and on for a good 100 or so miles, you’ll find that your belt will be near its end afterwards. Your standard Can-Am belt will also meet a short end if you’re foot on the floor breaking trail. If the trail is broken in, however, and you’re running a Mavric belt and a Dalton clutch kit, you’ll be able to do 30 mph in high all day long… with an outside air temperature in the negatives.

Another thing you should consider when installing and running tracks on your Can-Am UTV is the machine’s electronic control unit. You can flash your ECU or get an ECU tuner to let the computer know that you have tracks on -- which affect the speedometer and makes your miles more accurate. You can get units that are easily installed via a simple plug-n-play attachment; and once summer rolls around and the tires go back on, all you have to do is simply unplug it. 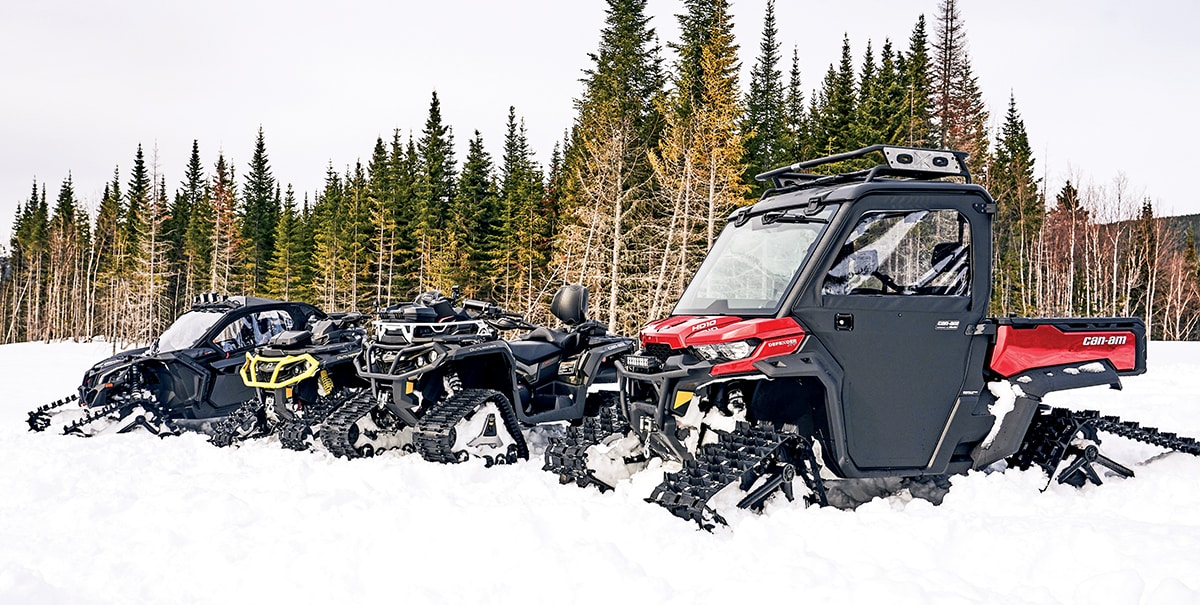 There are a few companies that make snow tracks for the Can-Am lineup, and some are made more for ATVs than UTVs. Apache 360 tracks, for example, have two styles, the standard Apache 360 and the Apache 360lt. As long as the tracks are the LT style, then they will fit on your Can-am with the proper install kit. We’ve seen the LT tracks on both UTVs and ATVs but not the other way around. The main difference between the two are that the 360 LT tracks are longer in the back, which provides more flotation and is better for larger machines. You can use them on ATVs, but they aren’t designed for the weight of a four wheeler.

Another awesome player in the Can-An track market is the Tatou UTV track system. They are known for having a great warranty and you can swap them for another brand if you so choose at a later date. One of these other brands is Camoplast. The manufacturers of the Camoplast tracks (Camso) designed them to fit on any UTV with the proper mount kit. So if you ever decide to sell them one day, Can-Am owners, Polaris Ranger owners, and even Yamaha Grizzly owners could all potentially buy them from you and install them on their machines. We have heard stories of the frame in Camoplast tracks bending after hitting a tree or rock, but we know some machines that have been grooming trails for years without issue.

Camso tracks can even work on the Can-Am Defender XMR. The company doesn’t want to be responsible when the bad stuff happens on an XMR with tracks, so they will tell you they don’t make it for the XMR. But yes it does work. It's a little bit more of a pain to install but it will work. The only caveat is that you’ll get snow in the snorkel, as the XMR is designed in a way that sucks in all the snow when it flies up from the tracks.

Speaking of snorkels for riding in powder, some people experience other things such as axle issues when running on tracks. Binding is a minor issue with some types of UTV tracks. But if you run your tracks “snow loose”, they won’t stick, as they are designed to skip before binding up and breaking things like axles and other drivetrain components. You can also avoid binding if you use the tracks with the skinny pizza-cutter bogie wheels.

In the event that you do get stuck, a winch can come in handy regardless if you have tracks or not. And if you’re on the ice with nothing to attach your winch to, you might want to come prepared with the equipment to make an "ice angel". An Ice Angel is basically a steel cross that you can use as an anchor point on the lake since you have no trees, poles, or bushes to tie off to. Instead of tying your winch to an object stuck in the soil, you drill an 8" hole through the ice, drop your cross through the hole, which then opens up and holds the force of your winch.