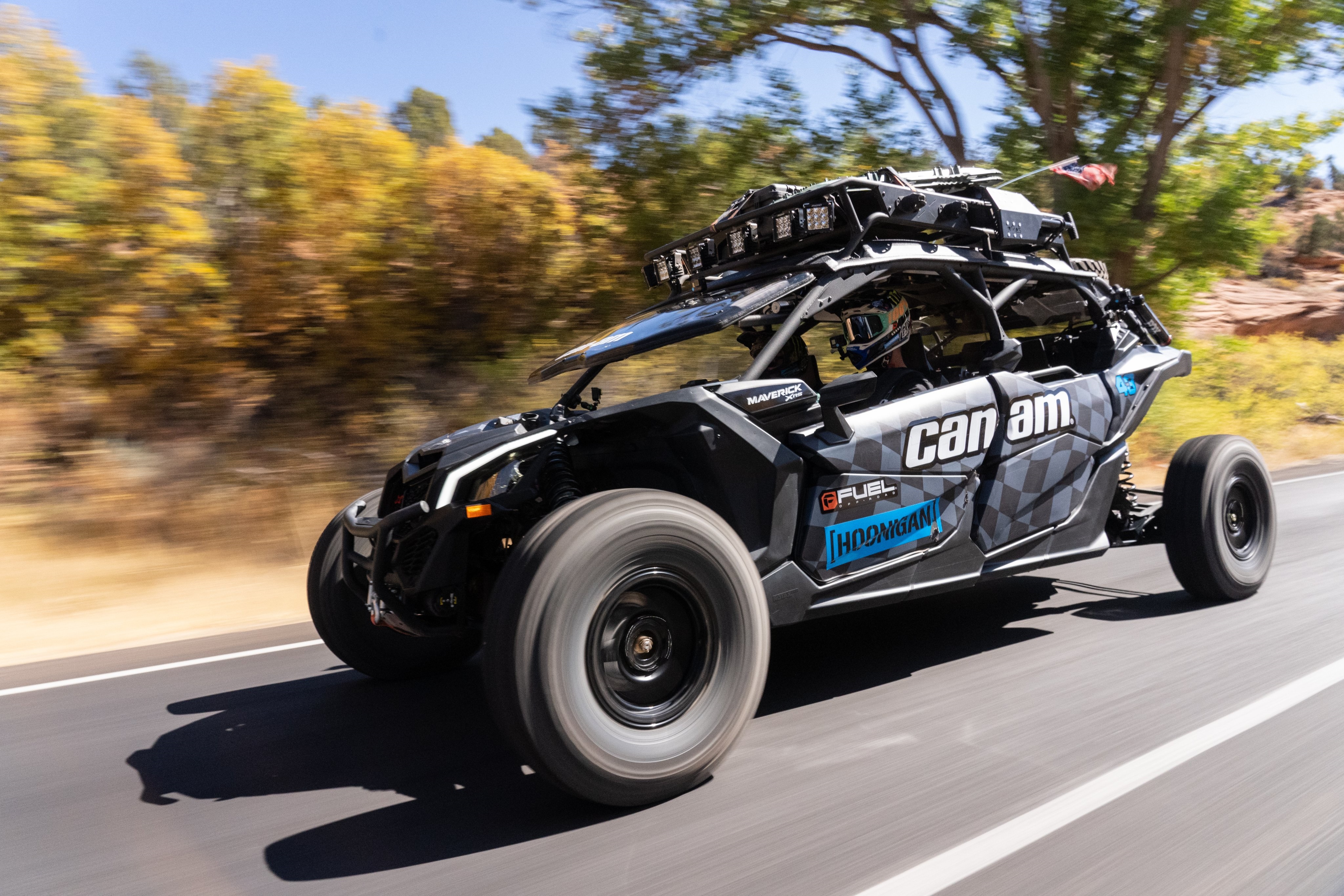 Mechanically, there’s nothing preventing any Can-Am side-by-side owner from riding on pavement. Aside from a little extra wear on -- as well as excessive rumbling from -- non-street off-road tires, the only thing that stops most riders from driving their Can-Ams on city streets and county roads is the fear of Johnny Law. If you're on a first-name basis with everyone in your small town, if you yourself are proud member of the force, or if your wife's cousins is married to a Sheriff’s Deputy, you might be able to ride your Commander, Defender, or Maverick through your town's main thoroughfare. If you're really connected, you could possibly even do so while blaring music from your MTX Audio sound system, sipping on a Bud Light fresh from your 24-pack cooler bag, and texting on your still-mounted cell phone, all without a care in the world.

More realistically, even if you’re abiding by the local rules of the road, keeping to yourself, or simply trying to fill up your gas take, without the proper street legal precautions, you’re liable to get a ticket at best, or get your machine confiscated at worst — albeit the latter would likely only occur after several violations. To be legal on the street, in most cases you’ll need a vehicle registration, insurance, and a valid license. But to get the government license, you’ll need the requisite accessories. And once you get a license, you'll need to display the issued license plate on a lighted license plate bracket. But let's not get too far ahead of ourselves.

Even if you have a DOT approved windshield, 4-point harnesses on all seats, turn signals, a full mirror kit, and the various other street legal accessories mandated by most municipal legal codes, your city, state, or county might still prohibit UTVs on public roads. In this blog, we’ll look into a few areas of this topic. Let's go!

Despite their popularity in Texas, side-by-sides such as the ones by BRP under the Can-Am brand are not permitted to be on any public roads. This is not exclusive to side-by-sides, however. It applies to all "off-road machinery", including four-wheelers, UTVs, and off-course golf carts. One would find it strange that motorcycles can be street legal, yet something like the Can-Am Maverick (which feels perfectly safe at speeds in excess of 75mph) cannot.

In early January back in 2020, Texas passed a new law that many Texans thought would make their Can-Ams street legal. But as of the time of this writing, it appears that it is just a piece of legislation mandating that UTVs be titled and registered, with nothing about making them street legal. As the current law stands, there is no stipulation requiring machines to have safety flags, blinkers, or headlights, but this only applies to SXS vehicles -- referred to as UHV’s in the bill -- within 25 miles of an agricultural interest. Although the applicable regulation used to be nonexistent on the TxDOT website, it is now both there as well as on the TX Parks and Wildlife website.

Some might think that there is no way to change your title in the state of Texas. After all, a blue title is a clear title. The only other kind of title you can have is a green salvage title, which requires the vehicle to be deemed beyond repair by an insurance company or registered TXDOT inspector. But we’ve seen it done firsthand. It’s a long process, don’t get us wrong, but yes you can make them street legal in Texas — even the title doesn't change to a clean blue on-highway vehicle title. Another loophole is to plate your machine in South Dakota. As far as we've seen, other states must respect the rights granted by an SD number plate.

As mentioned earlier, the best street legal kit for you and your UTV would depend on your state laws. In a lot of mid-western states such as Arizona, your side-by-side needs to have a horn audible by individuals up to a certain distance, a lit license plate that is road registered, and a rear view mirror. You also have to have a regular tag as well as an off-highway-vehicle tag, and they both have to be displayed a certain way.

In some communities, noise restrictions are in place to prevent vehicles with loud exhausts from being street legal. Similarly, emissions laws have exist in several states that require specific types of mufflers and exhaust systems. If you live in such areas, check your state DMV to see what you can and cannot do.

Registering Your Can-Am In A UTV-Friendly State

In states like North Dakota, there are no laws that clearly and definitively spell out which street legal accessories you need to have and where you can or cannot ride. Small-town deputies probably couldn’t care either way, so long as you’re not an idiot and don’t make them respond to complaint or 911 calls because of you.

Even if you’re near a city that has a city ordinance banning UTVs, you still might be alright on county roads. You might not have to do a thing to your rig — no registration, no title, no lights, nothing — if you have it registered as a piece of farm equipment. Like a tractor, however, you’ll still need to display an orange slow-moving vehicle sign; which is ironic considering most Can-Am side-by-sides can easily reach speeds in excess of 65mph.

As we mentioned earlier, a lot of riders who live in non-UTV friendly areas get their machines registered out-of-state with license plates and all the requisite paperwork. You can go to places like South Dakota (which doesn’t even require a physical inspection) or trailer your Can-Am down to Louisiana and have them do a state inspection on it. You can then transfer the title to an in-state address and get in-state tags. If you have a buddy with a farm, transfer it to their address and get farm plates for those particularly draconian non-UTV friendly states.

At the end of the day, however, what it always boils down to is the disposition and discretion of law enforcement members in your area. When they see people driving ATVs on the roadway, a lot of police officers will generally make contact with them, but take various things into account when deciding how to proceed — for example how they are riding, are they drinking or playing loud music on their overpowered stereo setup, do they have children with them, was a complaint called in, etc. You get a Game Warden on a bad day and even a Can-Am equipped with a complete street legal kit, license plate, registration, and everything else could still result in at least a warning if not a violation.

arn more about the UTV street legal regulations in your area.